Viola Ricard, 92, of Crookston, MN, passed away on June 22, 2022, at Villa St. Vincent in Crookston with her children at her side. 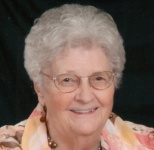 Viola Marie Ricard was born on November 23, 1929, at home near Gentilly, MN, the daughter of Francis and Elizabeth (Audette) Amiot. Viola attended  Prairie Queen country school in the Gentilly area. She was baptized, confirmed, and married at St. Peter’s Catholic Church in Gentilly. She married Elmer Ricard on January 21, 1947, and they made their home on a farm near Red Lake Falls, where they lived until 1977 when they moved to Crookston. Viola and Elmer were able to enjoy 13 years wintering near Mission, Texas, from 1987-2001. They were married for 61 years, until Elmer’s passing in 2008.

Viola enjoyed camping, visiting with family and friends, and especially holidays spent with her loved ones. She was a faithful member of the Cathedral in Crookston, where she was a member of the Catholic Daughters, and St. Anne’s Sodality.

Viola was a loving mother to six children, and a caretaker to her aging parents. She was a gracious host to all who came into her home. One of her greatest pleasures was spending time with her children, grandchildren, and great-grandchildren. Viola was a humble, hardworking, farm wife, who perhaps lived without acknowledgment, but was a teacher and inspiration to her family. She found the silver lining in every situation.

A Mass of Christian Burial honoring the life of Viola Ricard will be held at 11:00 a.m. on Wednesday, June 29, 2022, at the Cathedral of the Immaculate Conception in Crookston with Father Patrick Sullivan presiding. Visitation will be from 5:00-7:00 p.m. on Tuesday, June 28, with a prayer service beginning at 7:00 p.m., at the Stenshoel-Houske Funeral Home. Visitation will continue one hour prior to Mass at the Cathedral on Wednesday.