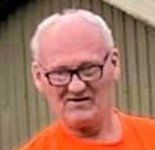 Roger was born on February 12, 1948 in Moorhead, MN to Chester and Maxine (Trader) Carr. He grew up in the Barnesville, MN area and attended Barnesville schools.  He later began working at various jobs including construction work and truck driving. Roger was united in marriage to Mary Stephen on August 23, 1996 at Moorhead, MN. The couple made their home at Felton, MN until Mary’s passing. Roger had previous marriages to Beverly Nodsle, Janie Seelye, and Beverly Johnson. From these unions 5 children were born: David, Troy, Becki, Kelly, and Bonnie.  Roger moved to Crookston several years ago and until his retirement due to ill health had been a seasonal farming employee for the past 8 years for Owen Larson and his nephews, Ben and Matt Larson, at Climax, MN.

Roger enjoyed visiting with family and friends and would give rides to anyone in need of transportation. He would often say to friends, “Lets go for a ride”, which would usually end up at a casino; be it the Shooting Star, Seven Clans, or a new favorite, the Grand Casino. Roger would often go to Little Falls, MN to visit his nonbiological family and enjoy home cooked meals and barbecuing while playing Skip Bo or Corn hole. He loved animals, especially his cocker spaniel, Jazzy.

Roger is survived by his children: David Carr of Fridley, MN, Troy Carr of Isanti, MN, Becki (Matthew) Braun of Sioux Falls, SD, Kelly Haraldsson of Farmington, MN and Bonnie Hall; brothers, David Carr of Beaverton, OR, and Andy Carr of Buffalo, MN; and special friends, Shannon Sykes and Allen of Little Falls, MN, and Kari and Bobby Nesvold of Little Falls. Roger was preceded in death by his parents, Chester and Maxine Carr; brother and sister-in-law, Larry and Mary Carr; and friend/companion, Susanne Gayton.

The memorial service for Roger Calvin Carr will be held at 12 Noon, July 8, 2022, at the Stenshoel-Houske Funeral Home in Crookston with Celebrant Trey Everett, officiating. Visitation will be for one hour prior to the service.