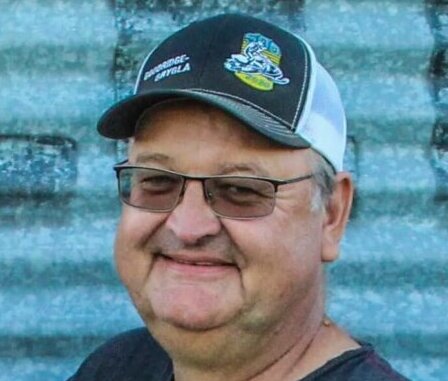 Goodridge – Robert “Gunder” Paulson, 57, of Goodridge,   passed away on Tuesday, November 23, 2021 at his home in rural Goodridge surrounded by his loving family.
Robert Allen Paulson was born January 17, 1964 at Northwestern Hospital in Thief River Falls, the son of Harry and Mabel (Olson) Paulson. He was baptized February 9, 1964 into the Lutheran faith. At an early age, his brothers named him “Gunder” by which he has been lovingly known since.
Gunder attended school in Goodridge, graduating with the class of 1982. Following high school, he attended the AVTI for Auto Mechanics in Thief River Falls.
On August 6, 1988 Gunder was united in marriage to Bridget Sjulestad at Ekelund Lutheran Church. To this union, two daughters were born: Arianna and Madison.
Gunder was very proud to purchase the Paulson Family Farm from his parents right out of high school. He raised small grains, pigs and various farm animals. Most recently, in spite of his wife, he enjoyed raising chickens.
Gunder worked as a mechanic at the Goodridge Cenex and worked at Firestone in Thief River Falls for a few years.
Gunder spent most of his life serving the Goodridge Community in various ways including: Goodridge Fire Department, Jaycee’s, Certified Firearm Safety Instructor, and Trailblazers. He was a community handyman – if you need something done, call Gunder. It might not have been fixed perfectly, but it was “Gunderfied!”
He enjoyed cooking, sewing, fishing, hunting, watching his daughters’ sports, summers at the lake, spending time with family and friends, racing snowmobiles, and collecting things he could “fix.”
Survivors include his loving wife, Bridget of Goodridge; daughters, Arianna (Layne) Nelson of Kremmling, CO and Madison Paulson of Goodridge; siblings, Gene (Sue) Paulson of Roseau, Karyl Kveton of Goodridge,  David (Diane) Paulson of Goodridge, Steve (Mavis) Paulson of Bemidji, Joann (Gary) Lundeen of Oklee; father- and mother-in-law, Howard and Karen Sjulestad of Goodridge; sisters- and brother-in-law, Lori (Derek) Haas, Ricky (Sue Ann) Sjulestad and Mandy (Randy) Klasen; and many nieces, nephews, relatives and friends.
He is preceded in death by his parents; sister, Lynette (John) Zupetz; brother-in-law, John Zupetz; and two infant sisters.
The funeral service to celebrate Gunder’s life was held on Saturday, November 27, 2021 at Zion Lutheran Church in Thief River Falls,  with Rev. Kristin Ostercamp officiating. Burial followed at Goodridge Cemetery.