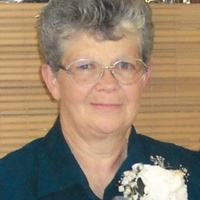 Pauline Vatsaas, Thief River Falls, MN, 86, passed away on Tuesday, February 9, 2021 at her residence with her loving family by her side.

A private memorial service will be held at 10:00 AM on Monday, February 15, 2021 at Johnson Funeral Service in Thief River Falls, MN.

Pauline Grace Halbasch was born November 2, 1934 in Thief River Falls, MN, the daughter of Theodore and Grace (White) Halbasch.  She was baptized and confirmed at Oak Ridge Lutheran Church.  She graduated from Lincoln High School in 1953.

On December 5, 1953, Pauline was united in marriage to Duane Vatsaas in Viking, MN.

Pauline was employed by Land O’ Lakes turkey plant, Arctic and Northwestern Hospital.  Her second family, the children at Discovery Care Center, was enjoyed by Pauline for 9 ½ years.  She was active in the Ladies Aid as President and Secretary, she taught Bible School and Sunday School, and was active in Altar Guild at Oak Ridge Lutheran Church.  Pauline worked with Girl Scouts and was a member of Stiener Community Club.  Pauline enjoyed being outside, loved to bake – her specialty was donuts.  She also enjoyed picking rocks, and watching the birds outside her window.  Her grandkids and great-grandkids were very important to her.

Pauline was preceded in death by her parents Theodore and Grace and brothers Chuck and Bill (Joyce).

In lieu of flowers, memorials preferred to Hospice of the Red River Valley.