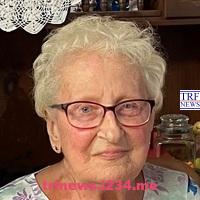 Esther Carol (Haattvedt) Paulson, the daughter of Arthur and Grace (Smith) Haattvedt, was born on August 28, 1931 near Halma, Minnesota. She was baptized and confirmed at Eidsvold Church in Halma. Esther attended school in Halma and graduated from Karlstad High School. She then furthered her education by attending Teachers Training in Thief River Falls. Upon graduation, she proudly taught at a Marshall County Rural school near Stephen, MN. She loved sharing many stories with her family about her time as a teacher.

On July 28th, 1951, Esther was united in marriage to Arden Paulson. They began their life together living in the Stephen area. As they continued to grow their family they moved to Drayton, ND and then, ultimately to the Deerwood Township in 1960. They were blessed with 5 children; Patricia, Michael, Gregory, Vicki and Marcia.

Esther was a homemaker on the farm while the kids were young and then worked at various local businesses. After losing Arden on March 15, 2005, she remained on the farm for several years until moving to Karlstad. Esther very much enjoyed spending quality time with her family, drinking coffee while visiting with friends and found great peace being outdoors watching birds and admiring her favorite flowers. She will forever be known for her delicious family recipes and baked goods.

She is survived by daughters – Pat (Tim) Kuznia -Chisholm, MN; Vicki (Geff) Ferguson – Plant City, FL; Marcy (Donny) Hendrickson – Karlstad, MN and by daughter in law Carmen Paulson – West Fargo, ND; 12 grandchildren and 12 great grandchildren and her sister in law Bernice Lindell of Stephen in addition to many nieces, nephews and other relatives.

Esther was preceded in death by her parents, husband, and sons Michael in 1970 and Greg in 2008, along with her three sisters.

Funeral services will be held at 3:00PM, Thursday, September 22, 2022 at Salem Lutheran Church of rural Stephen.  Visitation will be held one hour prior to services at the church.

Interment will be held at Salem Lutheran Cemetery following services.


To plant Memorial Trees in memory of Esther Paulson#

Orbit | The Reverend Casimir A. Paluck