Lorraine Gredvig, 93, Fertile MN, passed away peacefully on June 6, 2022, at RiverView Hospital in Crookston, MN surrounded by her family.

Lorraine was born April 2, 1929, to Fred and Gladys (Lunden) Madson in Little Falls, MN. In 1933 she moved with her family to a farm near Mizpah, MN. She was baptized and confirmed in the Lutheran faith by attending Bethesda Lutheran Church in Mizpah. 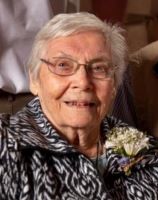 She graduated from Northome High School in 1947 and the Fairview Hospital School of Nursing in 1950. After graduation, she started her career as an RN at Bethesda Hospital in Crookston, MN. From 1966 to 1989 Lorraine was the school nurse at Fertile Beltrami School. During her nursing career, she touched the lives of many people. She was concerned about the whole person, treating their illness with a listening ear.

While nursing at Bethesda she met the love of her life, Paul Gredvig when he was treated for appendicitis. They were married on November 3, 1951, in Mizpah, MN. They lived on the Gredvig family farm in Fertile, MN. Together they raised four children – Carol, Nancy, Gloria, and Ronald.

Lorraine loved the outdoors and was an avid hunter, fisherwoman, and gardener. She enjoyed time with her family and friends. Lorraine traveled with her husband to many states across the US as well as Australia, New Zealand, and Norway. She was an active member at Concordia Lutheran Church, participated in Women’s Study Club, 11 or More Homemakers and Red Hats was an adult leader for the Fertile 4-H Club and volunteered at RSVP and the AELC. Later in life, she developed a passion for wood carving creating many keepsakes for family and friends.