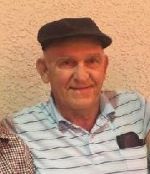 Jim was born in Menomonie, WI on March 15, 1936, to Leonard and Frances (Gerbich) Simon.  He graduated from Buhl High School in 1954 and went on to serve his country in the United States Army during the Korean War.  Jim attended both Wisconsin State College at River Falls and St. Cloud State University and later attained his master’s degree in education at Bemidji State University.
He met the love of his life, Marilyn Toscano and they were married in 1959. They moved to Crookston, Minnesota in 1965 where he worked as a dedicated science teacher and coach.  In Crookston, he was the Head Baseball Coach for 31 years and in 1995 won the Minnesota State Class A Tournament, which was the highlight of his coaching career.  Jim has a baseball field in Crookston named in his honor. He was also an assistant football coach for most of his career and they won a state championship in 1980.  He was inducted into the Crookston Central High School Athletics Hall of Fame in 2016.  He was also a well-known basketball official in northwest Minnesota.  He coached the Crookston American Legion Post 20 Baseball Team for 20 plus years.  He was affectionately known as OJ or Sarge to many of his ballplayers.
Jim retired in 1996 and soon after, moved back to the Iron Range with Marilyn.  For over 20 years, they traveled to and wintered in Mesa, AZ.  Jim was an avid bowler, fisherman, and card player.  He enjoyed spending time doing puzzles, including sudoku and crossword.  Jim was heavily involved with the Crookston American Legion, was an Elk’s Lodge member, and served as the Exalted Ruler of the Crookston Lodge for a one-year term.  He was also a member of the Fraternal Order of Eagles and the Knights of Columbus.

A private family service will take place at a later date with interment at the Maple Hill Columbarium.