GFFD responded with two HAZMAT-equipped stations with HAZMAT apparatuses, one more fire engine, and a command vehicle. First arriving crews found the building evacuated of employees. With the assistance of Simplot employees, crews were able to locate the leak. After special HAZMAT suits for protection were used, entry to the facility was made, and the leak was controlled and stopped at 11:30 a.m. One employee was evaluated by Altru Paramedics on scene and released. No other injuries were reported. The leaking ammonia was confined to a room within the structure that had a ventilation system in place. No other danger existed to other structures or businesses. 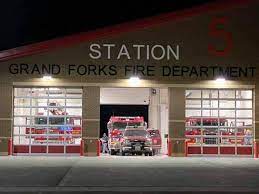