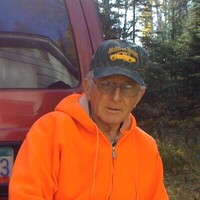 Memorial service will be held on Sunday, October 10, 2021 at 2:00 PM in Open Arms Christian Fellowship with David Jahn Officiating. Burial will be held at Oak Grove Cemetery near Red Lake Falls, MN. Visitation will be held one hour prior to the service at the church on Sunday.

On July 7, 1931, George was born to Millard and Thelma (Rustad) Dailey in Red Lake Falls, MN. He was raised on the family farm located on Badger Creek, south of Red Lake Falls. His love of the outdoors began with his early adventures along the creek. He graduated from Lafayette High School in 1949.

After high school, George moved to Pendleton, OR, to build furniture at Harris Pine Mills. It was at this time he met his future wife, Elsie Randolph. After three years of factory work, George returned to Red Lake Falls, where he began working for the USDA Soil Conservation as a manager. In 1958 George and Elsie were married in Pendleton, OR.

George continued working for the Soil Conservation Service for nineteen years as he and Elsie raised their six children. During this time, he also farmed grain and sheep.  In 1974 George began working for Red Lake County, overseeing the maintenance of the county’s drainage ditches. Over the years, he assisted with clearing snow from the roads in winter months, highway department, and was the county’s environmental officer before retiring in 1996.

After his retirement, he spent time in the woods sawing lumber with his chain saw lumber mill. He used the lumber for his getaway cabins. The north cabin was located near “Gladin Camp” close to Fourtown, MN. He spent time hunting here with family & friends. The south cabin was located on Long Lost Lake near Itasca Park, where he fished and canoed with family and friends.

Time spent outdoors, hunting, fishing, trapping, and camping were lifelong enjoyments that kept him active until he could no longer get through the woods. Gardening and harvesting his vegetables brought George a lot of pleasure and enabled him to share with his friends and those in need.  He volunteered at the Community Center in Thief River Falls, which brought him joy to help others. He was an active member of the Seventh-Day Adventist Church his entire life.

He was preceded in death by his wife, Elsie, parents Millard and Thelma, granddaughter Trisha Hallock, and brother Robert Dailey.