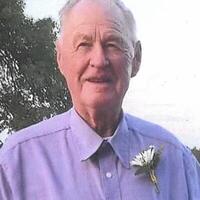 Eugene Wavra of Red Lake Falls, MN passed away on Thursday, September 15, 2022 surrounded by his loving family at Sanford Hospital in Fargo, ND.

Visitation will be held Friday, September 23, 2022 starting at 5:00 PM with a prayer service at 7:00 PM at St. Joseph Catholic Church in Red Lake Falls, MN and also one hour prior to the service on Saturday at the church.

Eugene Francis Wavra was Born on November 14th, 1933 to Dorn and Mary (Steer) Wavra, grew up in Euclid, MN with his brother Vern and sisters Darlene and Sharon.  In 1953 he entered the US Army and served his country as a mechanic stationed in Germany until honorably discharged in 1955.

Eugene met his sweetheart Jeanette Audette at the county schoolhouse dance. Shortly after his return from serving in the army, they were united in matrimony on June 13, 1956. They settled in Red Lake Falls and enjoyed raising their family of 12, David, Jim, Kathy, Greg, Carol, Keith, Robert, Diane, Christine, Shirley, Susan, and John. All live within 80 miles from the homestead.

Eugene went to work for his brother Vern at the black smith shop as well as trucking and maintaining a working farm. Later purchased a truck of his own, starting his own business hauling livestock to market for local farmers. Famously known as the friendly trucker of Hwy 75 never meeting somebody that was not an instant friend. On the farm he had many responsibilities and hobbies including growing his own food in the garden, raising cattle, sheep, chicken, pigs and catching fish.  Eugene enjoyed visiting with neighbors, sharing coffee, cookies, and a story.  In 1998 retiring his truck and continued working after his retirement repairing boats for close friends.